This is the April 2022 update from the IMS Investment Team. The purpose of this bulletin is to provide a summary of the recent headlines and trends that have been influencing markets over the last month and to highlight key aspects of the IMS portfolio service. 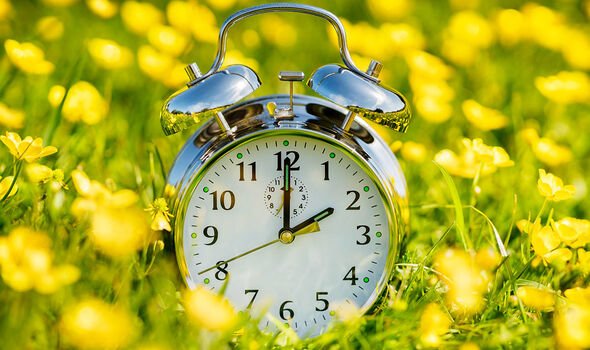 It has often been noted that during the pandemic, time appeared to move more quickly; two years passed in a flash. Despite this it does seem to have taken forever for the clocks to finally spring forward after what turned out to be a long and metaphorically dark winter. But they now have and as we enter the second quarter of the year, we can begin to enjoy lighter evenings and, hopefully, a broader sense of positivity as well.

The invasion of Ukraine began on the 24th February and in the month that followed the world watched as Russia tried and failed to make significant progress in their attempts to capture major cities, resorting to what often appeared to be indiscriminate shelling in an apparent attempt to reduce morale. As we ended March there was increasing hope that given their lack of success, the Russians seemed more inclined to strike a peace treaty, although it is hard to imagine one which allows them to save face without requiring too much contrition by Ukraine.

Despite the initial market reaction to the invasion and the subsequent sanction-led sell-off, many analysts have been surprised by the relative composure shown by many indices. By the end of last month the S&P 500, FTSE 100 and MSCI All-Country World indices were all back to their pre-war levels, as were all of our portfolios.

Performance of major indices since the start of hostilities 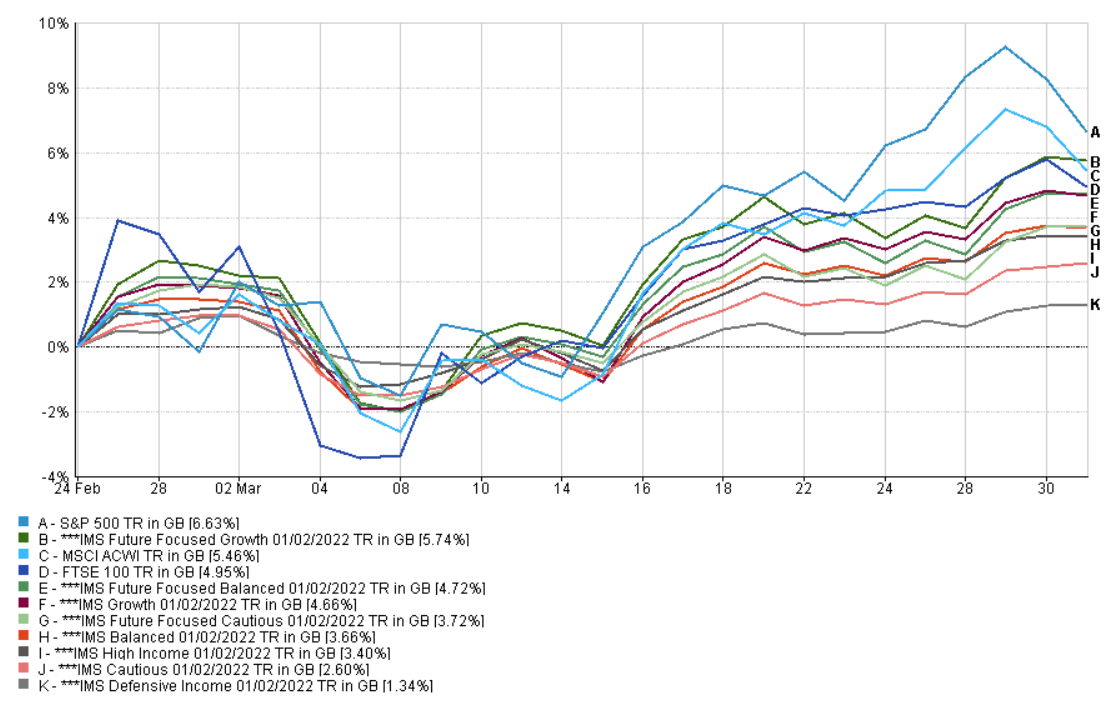 Despite this, it is important that we don’t become complacent. A number of challenges remain from stubbornly high Coronavirus infection rates to the cost of living crisis and its corresponding effect on interest rates. The interconnectivity of world markets can be compared to the complexity of the human body; if you’ve ever experienced knee pain you might be familiar with how it can lead to shoulder ache as you adjusted your gait to compensate and the same can be seen in markets. Whilst the immediate effects of Russia’s war appear to be minimal, its effect on commodity prices and fixed income markets have the potential to cause greater and potentially unforeseen problems in the future.

The most obvious and possibly most impactful of these factors remains interest rates. While the war in Ukraine justifiably dominated the front pages, in the world of finance much of the attention last month was focused on the policy meetings held by the Bank of England (BoE) and the Federal Reserve (Fed) in the US. There was never much doubt that both central banks would announce a rate rise. The bigger question was how much support the moves would have and whether they would stick to their standard tactic of 0.25% increments.

In the UK, the BoE stuck to tradition, raising rates by another quarter percent to 0.75%, the third rise in four months. Only one member of the bank’s Monetary Policy Committee rebelled against the consensus which saw the UK’s interest rate move back to the level it last hit before the pandemic began. At the last vote in February, 4 of the 9 members opted for a 50bps increase but the reaction in Gilt markets this time could be generously called minimal which indicates that the rise was entirely priced in. Despite inflation being forecast to hit 8% in the UK, there was a softening in the language about the outlook with the word “might” replacing “likely” in respect of whether further tightening might be necessary in the future.

Meanwhile, in the US the Fed resisted pressure to play catchup, opting for the same 0.25% increase in their first move since 2018. Bond markets are pricing in 6 further rises in 2022, each at the same level, up from the 3 that were expected at the start of the year. The unusual element of the current situation is that all this talk about rising interest rates has meant that government bonds, usually seen as a safe haven in times of crisis, have seen their yields rise from very low levels which has caused their capital values to fall. It is one thing to be confident that a bond issued by the United States wont default, but another to know that interest rates will erode the value of your asset.

As recently as the start of the year fixed income markets were holding firm as the Fed’s insistence that inflation would be transitory was the dominant theme. With inflation recently hitting a 4-year high of 7.9% any remaining resistance has disappeared and the headline 10-year Treasury rate is up almost a percent (from just 1.5%) year to date. Whilst they will want to see how factors such as the war in Ukraine and disruption caused by China’s increased Covid restrictions play out before taking further action and potentially damaging future growth prospects, any hope that the Fed has not entered a new rate rising cycle has faded.

US interest rates versus inflation

On the Covid front, hospitalisations have unsurprisingly picked up in the UK since most restrictions were dropped but thankfully it seems as though the level of serious illness and deaths is not rising at the same rate. For now it seems as though the government’s tactic of relying on a high vaccination rate along with requests for common sense seems to be working. The same can’t be said of China where a failure in their zero-Covid strategy has led to a rapidly worsening situation which has resulted in lockdowns in Shanghai, the financial capital, and Shenzhen, a major technology hub.

Concern about the virus combined with ongoing worries about the impact of a regulatory clampdown on stocks held on US indices as well as ongoing speculation about a default by Evergrande, the giant property company, caused Chinese equities to have a rough ride over March. The MSCI China index recently lost a fifth of its value in less than a month including its biggest one-day fall (-7%) since 2008. Half of the monthly loss came from only seven internet-focused companies, however, and investors clearly considered the fall as overplayed because on one day the index jumped by 15% while the Hang Seng Tech index was up 20%.

With western powers expressing scepticism about Russia’s claims of peace, we expect to see a continuation of higher volatility, albeit hopefully not at this scale, as we head into the final month before the next review. Equities have remained more robust than bonds and there are many positives to be seen including UK GDP rebounding by more than forecast in January and US employment being almost 50% higher than expected in February. (Y)our portfolios remain well diversified and ready to benefit as stability returns.

Market and sector summary to the end of March 2022

It has often been noted that during the pandemic, time appeared to move more quickly; two years passed in a flash. Despite this it does seem to have taken forever for the clocks to finally spring forward after what turned out to be a long and metaphorically dark winter. But they now have and as we enter the second quarter of the year, we can begin to enjoy lighter evenings and, hopefully, a broader sense of positivity as well.