This is the March 2022 update from the IMS Investment Team. The purpose of this bulletin is to provide a summary of the recent headlines and trends that have been influencing markets over the last month and to highlight key aspects of the IMS portfolio service.

Thank you to everyone who has already responded to the latest review of the IMS portfolios which was sent out last month. We’ve had an excellent response so far, but if you have not yet had an opportunity to send us your acceptance, we would be grateful if you could so that we can make sure your investments are in the latest fund selection.

In light of recent events it is perhaps unsurprising that the bulk of this update centres on the situation on Europe’s eastern border. While there are other elements that are impacting on the medium term investment outlook, the situation in Ukraine is clearly the most relevant at this juncture. For the avoidance of doubt, this update is designed to cover the investment impact of Russia’s invasion of Ukraine and I’ll leave any commentary on the humanitarian impact to those better placed to comment.

In the immediate aftermath of the invasion many markets were sharply down as they reacted to the uncertainty of events. However, the scale of the reaction varied around the world. In the UK, which had enjoyed a strong start to the year, the FTSE 100 was down almost 4% while other European indices were also in the red given their proximity to the region. Markets in the US were more restrained and by the end of their trading day, the S&P 500 was positive and many others have staged recoveries in the days since the invasion started.

We need to remember that only 2 years ago we were struck by a pandemic which caused massive changes to the way we lived our lives and from which, at times, it looked like we might not be able to recover. Of course, we now know what happened after the initial shock passed and whilst it’s too soon to say with any confidence that the same will happen with this latest crisis, it is important to remember that capitalism has stood up to more strident tests than it is currently facing. To help put this into context, this table shows how the S&P 500 has responded to previous geopolitical events and it highlights that even those that seem most serious tend not to have even medium-term impacts:

US S&P 500 versus historical geopolitical events 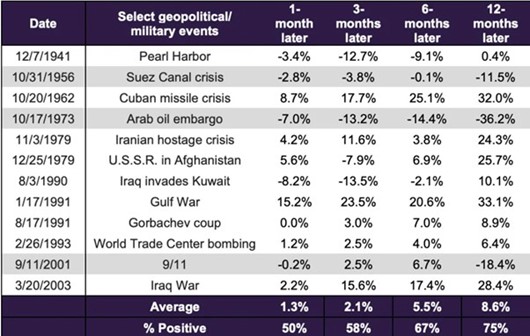 One of the symptoms of events such as this is a worsening in the signal to noise ratio, i.e. the quantity of views increases but the level of information does not. As well as the coverage we’re all seeing across the news channels and on social media, we are also receiving a deluge of updates giving an opinion on the crisis. However, just because every other email that I receive refers to Ukraine, it does not mean they add to the weight of understanding. The situation is moving too fast, the consequences too uncertain. Markets, as shown by their reaction in the hours and days after the invasion was launched, are wary of uncertainty but are not pricing in the most serious potential outcomes.

From an IMS perspective, our main exposure to the region comes via the Fidelity Emerging Markets fund which has around 4% in Russian companies based on the latest available data. The largest position we hold is 6% in IMS Growth which therefore equates to a very small weighting in terms of the overall total. We also have a 4% holding in ASI Global Emerging Markets Equity Income, which has around 8.7% in Russia, as well as positions in global equities and global bonds.

We have already had reactions from many fund managers who have exposure to Eastern Europe and they have all made similar points about not making any snap calls on the region at this stage. Whilst the sanctions being imposed on the country will obviously create problems for Russian companies, so far they have primarily focused on the banking sector leaving the important energy sector largely unaffected because of what this would mean for the countries that depend on Russia for their oil and natural gas imports. None of our funds are particularly exposed and our models are even less so thanks to our ongoing efforts to enhance diversification.

Whilst a short, sharp shock from Eastern Europe appears to be the clear and present danger, in the background the less headline-grabbing factor is the ongoing uncertainty about what action the major central banks will take in the face of rising inflation which has the potential to have a longer term impact on the global economy. Even before Russia’s invasion, in both the UK and Canada inflation rose to a 30-year high in January while in the US, where prices recently hit a 40-year high, retail sales rose by almost 4% in the first month of the year to a new record high. Crude oil prices have now returned back to the $100 a barrel level for the first time since 2014 as recent events have added to earlier rises which only adds more upward pressure to inflation.

The impact of this uncertainty is possibly most obvious in US government debt. US Treasuries are a critical part of the economy and they are currently experiencing the highest level of volatility since the start of the pandemic as traders try to interpret the updates released by the Federal Reserve. The situation isn’t being helped by speculation about whether rate setters might opt for a full 0.5% increase at their next meeting in order to avoid a drawn out raising cycle. Before the invasion markets were pricing in between 6 and 7 hikes in the US and UK this year, while the one rise that the ECB are predicted to make could grow if conditions on the continent don’t change. We will be carefully watching to see how they interpret the ongoing situation in Ukraine

Despite continuing attacks from Russia, peace talks are apparently still going ahead and it is to be hoped that the weight of economic sanctions are enough to convince president Putin that his goal of a reunited Russia is not in his power. In fact it seems this action has the potential to give him the exact opposite of what he wants - more European countries joining NATO, Ukraine joining the EU, a long-term breakdown in relations with rich nations and potentially most significantly (for him at least) a loss of respect in his own country, by his generals, and by the oligarchs. Markets are likely to be unpredictable for some time yet, but as ever it is this volatility that powers markets. The FTSE 100 is now back to the level it sat at before Covid struck and the S&P 500 is a thousand points higher than at the same point.

We have two months left before our next investment review is due at which point we should hopefully have greater clarity and in the interim we will continue to work with our fund management partners to understand the steps they are taking as the situation progresses. We will remain focused on our long term objectives and ensuring that we don’t let short term events distract us from our tried and tested approach.

Market and sector summary to the end of February 2022

In light of recent events it is perhaps unsurprising that the bulk of this update centres on the situation on Europe’s eastern border. While there are other elements that are impacting on the medium term investment outlook, the situation in Ukraine is clearly the most relevant at this juncture. For the avoidance of doubt, this update is designed to cover the investment impact of Russia’s invasion of Ukraine and I’ll leave any commentary on the humanitarian impact to those better placed to comment.