This is the December 2021 update from the IMS Investment Team. The purpose of this bulletin is to provide a summary of the recent headlines and trends that have been influencing markets over the last month and to highlight key aspects of the IMS portfolio service.

Following a fairly quiet few weeks where most of the focus was on when interest rates might rise, on the final Friday of the month the spectre of Covid made a dramatic return. Coronavirus infections have been rising in Europe recently and despite the reintroduction of some restrictions markets had seemed largely unconcerned. The change came when, in an act of perverse timing, Black Friday brought with it news that a new variant of Covid 19 had been found, sending markets rapidly downwards. Many indices had been trading at record levels but following the announcement of the B.1.1.529 variant, better known as Omicron, the FTSE All World index was down 2.2% on the day, slightly better than the S&P 500’s 2.3%. Europe’s indices were hit more strongly, perhaps because of the reimposition of restrictions on the continent. 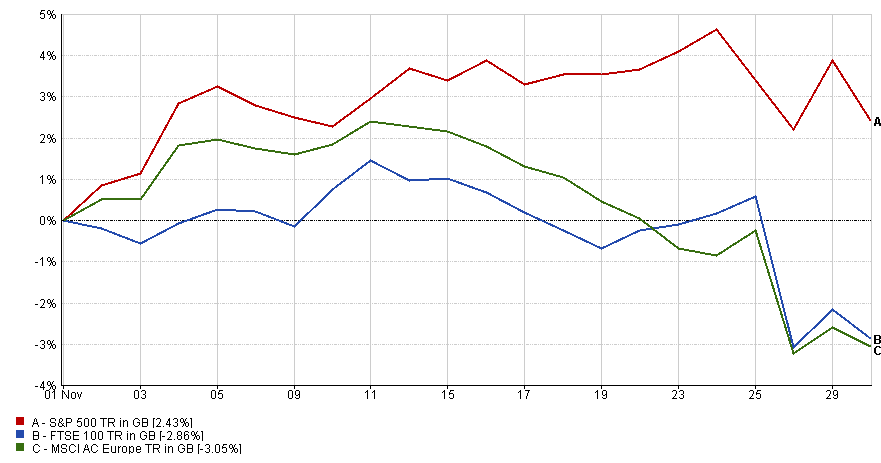 The variant, which appears to be more easily transmissible and also less susceptible to vaccines, was first discovered in Botswana and has been blamed for a spike in infections across the region. The World Health Organisation quickly called an emergency meeting to discuss the development and many countries, including the UK, imposed controls on travellers from affected regions. The initial reaction to the news shows that Covid still has the potential to cause spikes in volatility, but the response is more a factor of the resulting uncertainty, which as we know markets cannot stand. Western nations can take at least some of the blame for this given how they have steadfastly failed to stick to their promises to deliver vaccines to developing countries, leaving them as petri dishes in which Covid was able to evolve.

Whilst the latest scare has removed some of the froth from the top, markets remain very high which we have previously noted as a concern given some of the potential headwinds on the horizon. As an example, before the final Friday, the US Nasdaq index was sitting at an all-time high, up some 25% this year. Looking below the surface, however, many of the constituent stocks are having a much less successful time: telecom stocks are down over 10% over the last quarter and many of the underlying stocks are down over 90%. Meanwhile, one measure of the price/earnings ratio for the S&P 500 shows that it stands at the second highest ever point, meaning the companies in the index have only ever been this expensive once before. The highest came just before the dot com bubble burst. 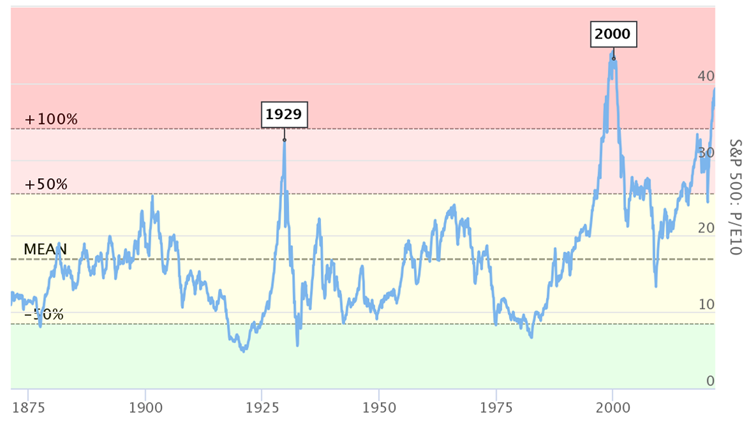 One side effect of the latest turmoil could be inflation. With transport companies badly hit by the subsequent selloff, oil prices also fell over a tenth. This came just as the major central banks were on the verge of admitting that inflation might not be quite as transitory as they had expected. On the Thursday, interest rate futures were pricing in a 75% chance of a December rate hike by the Bank of England but by the Friday this had fallen to 55%. Earlier in the month, President Biden, having been rebuffed in his attempts to convince OPEC to increase their output, attempted to take some control over price rises by announcing a release of 50m barrels from their strategic stockpile. This equates to less than 3 days worth of US oil consumption and was lower than expected. Given that OPEC could much more easily impact on the overall supply it is not overly surprising that oil prices moved upwards following the news.

We will wait to see how long the fear around this new variant persists, but it seems likely that markets will shrug off this challenge and that the impact on inflation will be minimal. The rate in the US recently hit a 31-year high of 6.2% while the rate in the UK sits at 4.2%, the highest level for a decade and just ahead of the EU's October rate of 4.1%. As things stand, three quarters of the top 20 economies in the world are experiencing price rises of above average levels. This links to previous comments we have made about how the number of records broken by the pandemic will require the years 2020 & 2021 to be heavily caveated in future economic summaries.

I wanted to end this email with a note about an enhancement to the IMS portfolio range with the introduction of an expanded ethical offering called Future Focused. As you will hopefully already know, we have managed an ethical model since 2011 which is based around the asset allocation of IMS Balanced. We are now adding two new portfolios which will share a very similar asset allocation to IMS Cautious and IMS Growth. We are also renaming the existing Ethical portfolio to Future Focused Balanced (this is the only change and the portfolio retains the existing risk profile and asset allocation).

The purpose behind the Future Focused name is to illustrate that the models have a broad remit that is not limited to any particular theme. The portfolios are created by collating scores on both negative and positive screening which is used to create a ranking to inform decision making in conjunction with our normal research process. The approach is to use funds which offer the highest ethical scores without bias to any specific criteria to allow us to retain our focus on creating highly diversified portfolios. More information on this approach can be found on this accompanying document.

We hope that aligning the new models to the main range will give clients the option to choose how they invest regardless of where they sit on the risk spectrum.

Market and sector summary to the end of November 2021

Following a fairly quiet few weeks where most of the focus was on when interest rates might rise, on the final Friday of the month the spectre of Covid made a dramatic return. Coronavirus infections have been rising in Europe recently and despite the reintroduction of some restrictions markets had seemed largely unconcerned. The change came when, in an act of perverse timing, Black Friday brought with it news that a new variant of Covid 19 had been found.