This is the July 2021 update from the IMS Investment Team. The purpose of this bulletin is to provide a summary of the recent headlines and trends that have been influencing markets over the last month and to highlight key aspects of the IMS portfolio service. 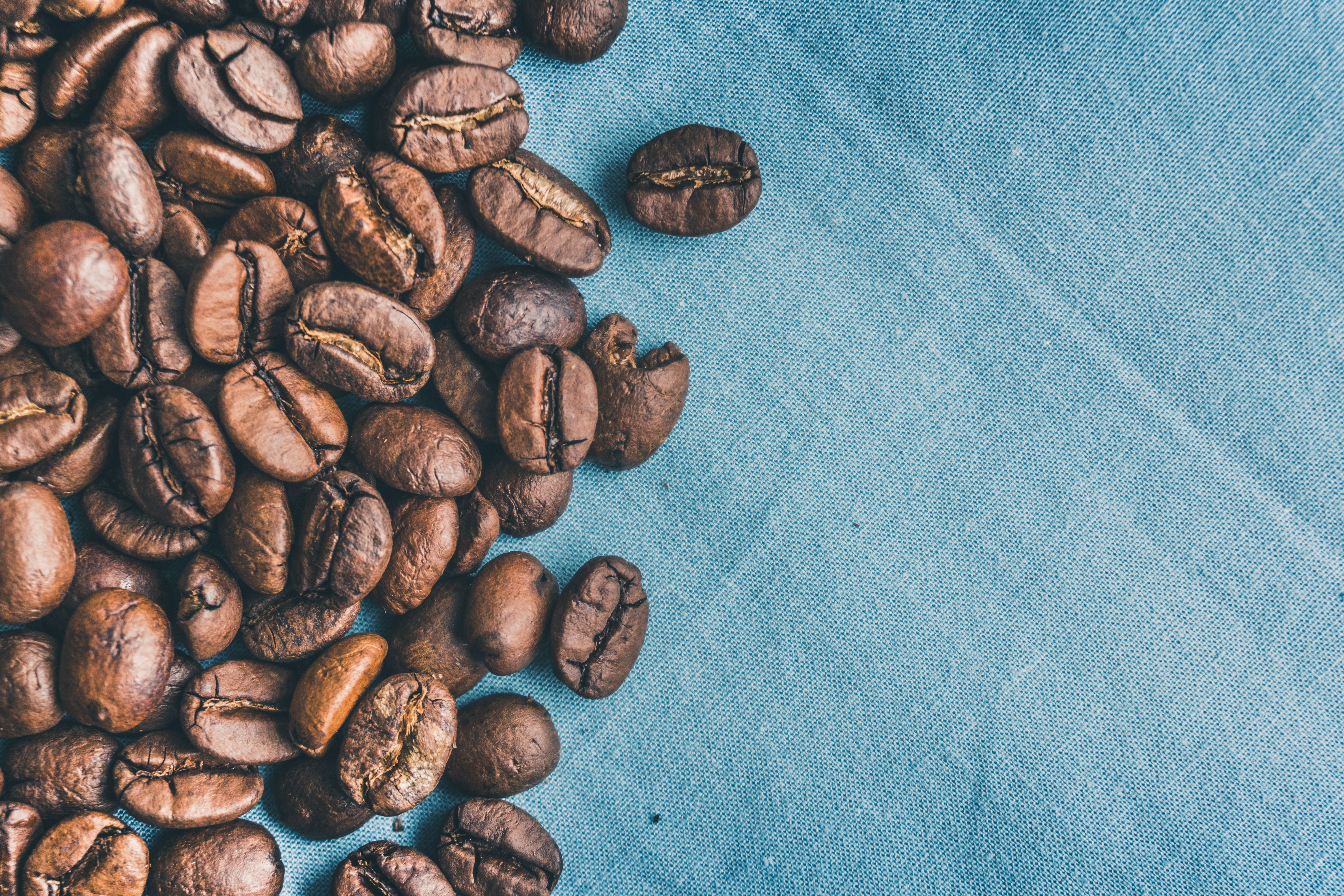 The first half of a year that saw us take the first stuttering steps back to normality ended on a positive note with the new Health Secretary suggesting that Covid restrictions for England would come to an end later this month. And for those of a footballing persuasion, the good news kept on coming. However, while the pandemic remained a recurrent theme over the period, the dominant story from an investment perspective was the return of inflation.

While the theme bubbled along steadily during the month, it came to a head when the latest reading was released in the US. This showed that for the 12 months to May, the main inflation rate rose by 5%, ahead of the already huge 4.7% rise that had been forecast. This is the biggest jump since 2008, but you would be hard-pressed to find anyone who was surprised that the rate was strongly positive. In the UK, May’s inflation number was 2.1%, ahead of the forecasted 1.8%, and also above the Bank of England’s (BoE’s) target for the first time in nearly two years.

One of the most obvious factors is the rise in oil prices which, having briefly fallen below zero at one point last year, could reportedly hit one hundred dollars per barrel before demand peaks according to a report from top traders. More broadly, commodities of all types have been rallying for months and many sit at record levels. Hard commodities like copper have benefitted from countries playing catch-up after infrastructure projects were put on hold and the same story can be told in soft commodities too. Since 2019 the price of standard breakfast materials such as coffee, milk, and sugar have risen by an average of 28% (according to trading on US futures markets).

Coffee and Crude Oil prices over the last 12 months 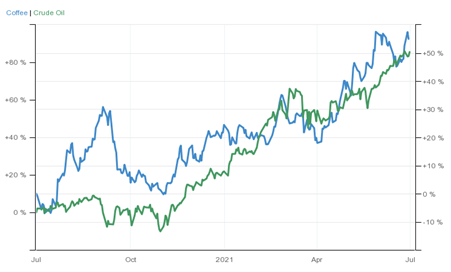 Predicting the direction of travel for the inflation rate is a lot easier than predicting the impact that changing prices will have on markets. Rising inflation pushes bond rates higher because it decreases the value of future coupon payments, in effect it is compensation for a loss of purchasing power. Then there is the issue of the wider economic effect; as prices rise, consumers and businesses are encouraged to spend money to avoid paying more in the future, and this is exacerbated by the increase in employment that typically happens at the same time.

All of these effects can currently be seen in most economies and as countries start to reopen these symptoms will only increase, but not all countries will be affected in the same way. In the US, the economic reopening has been happening with gusto for some time and this explains why inflation is so much higher there than it is in the UK. However, over this side of the pond we have our own unique factor to consider: Brexit. The withdrawal from the EU (which as recent news headlines will attest, is far from concluded) already appears to have contributed to price rises.

In terms of economic growth, the latest results for the UK were unsurprisingly positive given the gradual unwinding of restrictions. GDP rose by 2.3% in April, slightly below the 2.4% that had been expected, and the fastest rate since last July. According to the OECD, the UK economy is set to outpace those of other major developed nations this year. The estimated rate of 7.2% will exceed even that of the US, however, this forecast was made before the announcement that the date for full reopening had been delayed by another 4 weeks. 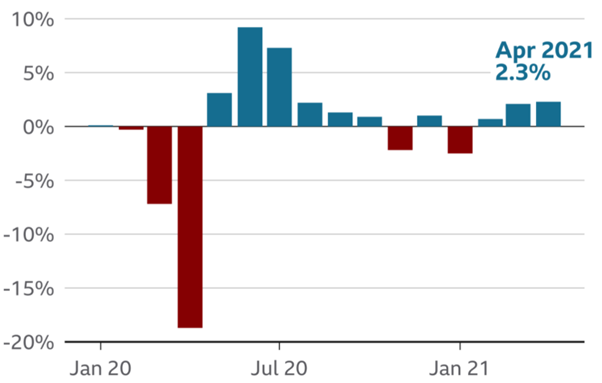 The challenge for the central banks is to prevent their economies from overheating without acting too soon or too fast and damaging the economic recovery. Earlier in the year, when inflation and how it would be dealt with started to become a pressing issue, it led to a spike in volatility that was less than favourable for markets. The main central banks have been very keen to point out that price rises will be transitory and that they are the completely predictable result of the crash in demand caused by the pandemic.

Markets are always sensitive to inflation and the corresponding rise in interest rates that follow, but after such a sustained period of ultra-low rates, this sensitivity has been magnified. A small increase to rates when the level is near-zero is much more impactful to borrowers than when it is at “normal” levels. In order to sooth fears, officials at the Federal Reserve (Fed) in America have repeatedly indicated that there is little chance of more than a single rate rise before 2023. However, following the latest spike, it emerged that at their latest meeting, the rate setting committee were now looking at a realistic likelihood of two rate rises in 2023, sooner than had been thought, with some members even suggesting that there could be rises next year.

Fed chair Jerome Powell has also been dropping hints that they are getting close to the point at which they will begin to reduce the $120bn of bonds that they currently purchase every month. Some of you might remember the impact that this so-called tapering had after the withdrawal of the stimulus that was enacted during the 2008 Global Financial Crisis... Three months ago the Fed forecast for inflation was 2.4% for 2021, but this has now been raised to 3.4%. With wage growth also on the up, it is not surprising that this is forcing a change of mindset.

So, inflation is on the up and rates are set to rise, therefore, markets wobbled, surely? Not this time. Whilst there was a dip following the Fed news, it was not significant and was soon reversed. At a recent investment committee meeting, I asked the guest speaker from Allianz why markets and long-term bond prices had not reacted negatively to the latest jump in inflation when they had done so when the rate originally started to move upwards earlier in the year. His response was that this is the single biggest question in investing at the moment.

One explanation that is often given for the lack of reaction is the likely temporary nature of the rise following the highly unusual crash in demand caused by the pandemic. But this was just as well known when the closely watched US 10-year Treasury rate jumped up to 1.74% in March and that has now fallen below 1.5%. A more realistic answer is, simply, that growth is very strong. Major economies are powering markets upwards and with US households estimated to have a combined wealth of nearly $140tn this is taken as evidence of the fuel that will power further growth.

The concern that I have, which is shared by many of my peers, is that markets (both equities and bonds) have lost their connection to fundamentals, they are powered by a fear of missing out in the here and now which is clouding out concerns about the future. The Fed meet again in August at which point I wouldn’t be surprised if volatility rises again as we hear more about their strategy. If this happens, it might benefit portfolios like ours that are less exposed to areas such as US equities which have been powering the rally.

Unlike the US rate setting body, which now takes an average approach to inflation, the UK’s Monetary Policy Committee, along with the European Central Bank, still targets a 2% ideal level. Even though our main inflation rate is only just above this level, it does not guarantee that the BoE will be able to resist rate rises longer than elsewhere. The margin of difference is small, and the bank is likely to dismiss this in much the same way as the Fed has, but they will be worried. Core inflation, which removes things like oil prices that have an excessive impact on the main rate, has risen from 1.3% to 2%, and RPI, the rate behind index-linked gilts, has risen to 3.3%. As with the US, we will continue to closely monitor the situation here, as both stories will define investment returns for years to come.

Market and sector summary to the end of June 2021

The first half of a year that saw us take the first stuttering steps back to normality ended on a positive note with the new Health Secretary suggesting that Covid restrictions for England would come to an end later this month. And for those of a footballing persuasion, the good news kept on coming. However, while the pandemic remained a recurrent theme over the period, the dominant story from an investment perspective was the return of inflation.