This is the October 2021 update from the IMS Investment Team. The purpose of this bulletin is to provide a summary of the recent headlines and trends that have been influencing markets over the last month and to highlight key aspects of the IMS portfolio service. 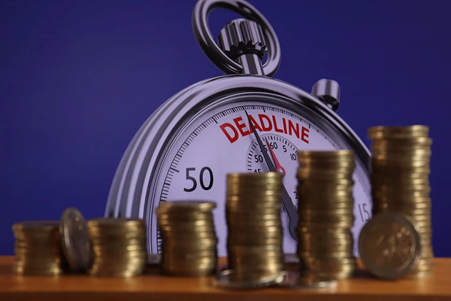 At our recent investment committee meeting, I asked the speaker from Blackrock for his thoughts on the current state of markets in light of the potential headwinds we are monitoring. Primarily I was thinking about the impact of the tapering of the Fed’s asset purchase programme, but I also included the rapidly approaching debt ceiling deadline as well as the potential contagion effect of the Evergrande situation in China. It’s fair to say that I was more than a little surprised to hear that his view was that markets had already “priced in” the potential risks.

The Fed is expected to begin the process of tapering by the end of the year, while the ECB already have (even if they have attempted to rebrand the process). For context, the last two times that tapering began in 2013 and 2018, the S&P 500 fell by 6% and 20% respectively. The same index is currently sat at almost its all-time high and whilst world markets might have become more diverse over the last decade, the old idiom that when America sneezes, the world catches a cold still applies.

I have written previously about how we deliberately avoided being overly exposed to the fastest growing markets as we felt that doing so would have put us at risk of greater volatility, should conditions have worsened. We have, as recent performance numbers attest, been able to achieve excellent returns despite this, but it is specifically the potentially nonchalant attitude of investors such as Blackrock that worries me. Investing in markets has many similarities with gambling – it is all too easy to get carried away by the memory of past returns or the fear of missing out. 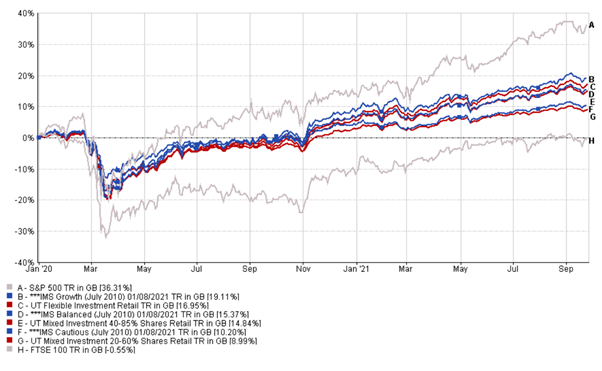 Now, this might sound like I’m predicting a market meltdown so I want to be clear that this isn’t my intention. Markets are remarkably robust, as they demonstrated in their response to dealing with a pandemic, but it might mean that there is the potential for some short-term volatility as we approach the end of the year. As well as managing your money, our job is to keep you informed about the factors that impact on the returns you receive. This is important because the more informed you are, the more you can understand what is driving short term performance and the more you can appreciate the value of remaining calm when markets are anything but.

To put things into perspective, let’s take a look at the risk factors highlighted at the start of this email. The Federal Reserve (Fed) have all but confirmed that they intend to begin tapering asset purchases from November with the intention being to conclude the process by the summer of 2022. This schedule is somewhat ahead of market expectations, as apparently is the path for rate rises too. The latest comments suggest that the first rise could happen next year, with three further rises in 2023. As ever, the concern is that the Fed will be taking action to reduce support just as the US economy is struggling with the Delta variant and the withdrawal of government support.

The debt ceiling has also been worrying investors who are more than aware of the potential for volatility if no agreement is quickly reached before it is raised. The debt ceiling sets the maximum that the US government can borrow and when it is close to being breached, it has to be increased. The cap has been increased 57 times in the last 50 years and whilst it should be a straightforward task as the repercussions are so serious, it has become increasingly politicised. The least bad outcome is a government shutdown and along with it the failure to pay its workers, while the worst outcome is an outright default.

The last shutdown in 2018 was estimated to have cost the US economy £11bn, with corresponding hits to GDP and employment levels. As they approached the end of October deadline, senior members of the Fed said that the country could run out of money as soon as the 18th October if a resolution wasn't found. The challenge is that while the Democrats passed a bill to prevent a shutdown in the House of Representatives, Republicans had sought to make political capital out of the issue as it passed through the Senate and repeatedly voted against it. In the end president Biden passed a temporary law which should fund the government until the start of December, but the crisis is a long way from concluded with a lot at stake ahead of the midterm elections next year. The Republicans will seek to paint their political rivals as the less fiscally astute party and are likely to use the situation to hinder the president's planned infrastructure strategy.

Although it is very unlikely to come to pass, one strategy that has been touted as a way of bypassing the impasse is to make use of a little known law that allows the president to instruct his treasury secretary to mint a coin with a value of his choosing. As such he could create a coin with a value of $1 trillion which could then theoretically be deposited into the Federal Reserve, allowing the government to pay its bills, even without Republican support. As ridiculous as this sounds, it would be an extension of the process of printing money that governments around the world have used to get through the pandemic.

The third point above relates to fears that the giant Chinese property development company Evergrande would default on its debt. This is a story that has been causing some jitters for quite a while, but it had been somewhat obscured by other events in the country as covered in previous updates. The company is the world’s most indebted property developer with more than $300bn of outstanding loans. Until recently they have been able to pay their creditors without issue, but there have been rising concerns following a government crackdown on the levels of borrowing in the sector, plus the slowing of the country’s property market. The Chinese government sought to prevent fears of contagion risks by injecting some $70bn into the banking sector to increase liquidity, however, they have previously intimated that they would allow so-called “debt bombs” to collapse. Whilst the company’s problems are not over, markets were placated by news that it had struck a deal for an upcoming repayment, but this probably isn’t the last we’ll hear about this situation.

In the UK the Bank of England recently voted to hold rates at 0.1% and to continue with current levels of bond purchases, but they have also indicated that if inflation remains high they could raise rates before the end of the year. They have increased their forecast for inflation, projecting a rise above 4% by the end of the year. The rate is expected to then fall back towards the bank’s 2% target, however, recent issues with gas prices as well as fuel/HGV driver shortages have the potential to create more spikes in the short term.

At the weekend Germany will be celebrating 31 years since reunification. What they won’t be celebrating, however, is the announcement of who will take over from Angela Merkel after 16 years in charge. The results of the election last week left Europe’s richest country facing weeks of uncertainty after Merkel’s CDU came second to the Social Democrats in a very tight poll. With the Green party having their best ever result, a new coalition will need to be formed with three potential combinations available. It took 6 months for an agreement to be reached when the process was last conducted in 2017 and with the country attempting to plot its way out of the Covid crisis it is in all our interests that it does not take as long this time.

Market and sector summary to the end of September 2021

At our recent investment committee meeting, I asked the speaker from Blackrock for his thoughts on the current state of markets in light of the potential headwinds we are monitoring. Primarily I was thinking about the impact of the tapering of the Fed’s asset purchase programme, but I also included the rapidly approaching debt ceiling deadline as well as the potential contagion effect of the Evergrande situation in China. It’s fair to say that I was more than a little surprised to hear that his view was that markets had already “priced in” the potential risks.