This is the September 2021 update from the IMS Investment Team. The purpose of this bulletin is to provide a summary of the recent headlines and trends that have been influencing markets over the last month and to highlight key aspects of the IMS portfolio service. 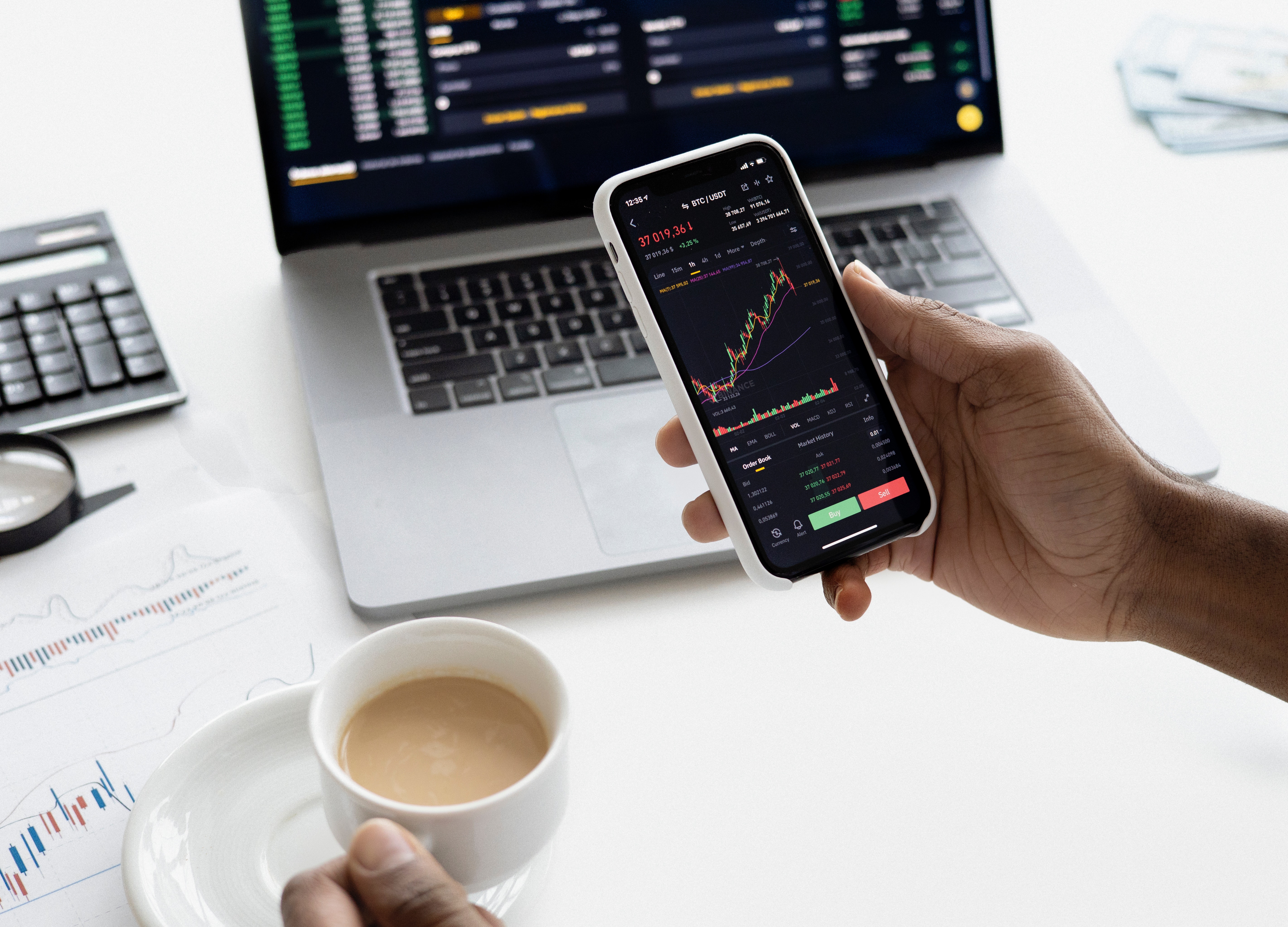 One of the themes from the quarterly review centred on the sustainability of the market rally we’ve enjoyed since the second quarter of 2020. The recovery from the pandemic low point has been unusual both in how quickly it occurred and also in its scale. In some markets, such as the American S&P 500, it took just 6 months for share prices to bounce back while many of the main indices in the EU reached their previous highs after a year. In the UK, the FTSE 100 is not quite back to its former level, but as we’ve discussed before, there are other factors at play that have held back our recovery.

Clearly, in order to recover so quickly, stock markets have had to produce very high levels of returns. This has seen the price of many companies rocket, both those of innovative technology names like Tesla and Amazon and then more recently those in industries like transport and energy which were particularly badly hit when the virus struck.

Such buoyant conditions have also fed through to the returns on our portfolios. The performance of the Cautious, Balanced and Growth models in the 12 months to the end of July is well into double digits and is around twice that of their long-term average over the last decade.

IMS Accumulation portfolio returns to the end of July 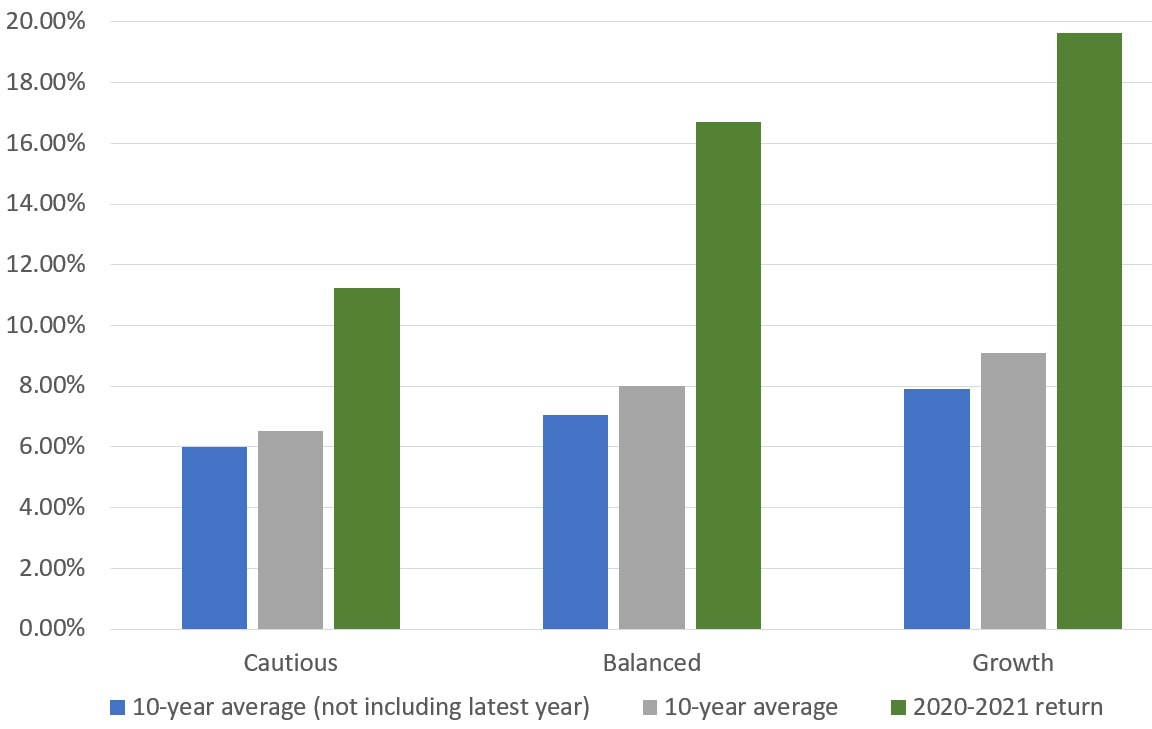 In essence, once the initial shock had worn off, markets realised that the pandemic would lead to a benign, low interest rate environment, supported by decisive action by central banks and governments. This saw share prices revaluated with many prices returning to their previous levels. The UK’s recovery from the pandemic was put into perspective with confirmation that GDP for the second quarter of the year had risen to 4.8%. The rise, which was boosted by the return of shoppers to the high street, was slightly behind the 5% that the Bank of England had predicted but it was largely in line with other economic forecasts.

The latest rate puts the UK ahead of both the US and Europe over the same period, although both regions are ahead on aggregate. The US has already surpassed its pre-pandemic level and economists are confident that the UK will have achieved the same outcome before the end of the year. However, when the data is revealed for the current quarter the results might be slightly less rosy as that’s when the impact of the Track and Trace system will start to show.

The buoyant conditions remained for much of 2021 until rising concerns about the Delta variant along with the potential for US Federal Reserve (Fed) action began to compete with positive corporate and economic news. A majority of Fed members now believe that they should begin to taper their asset purchase programme within the next 4 months. Reducing the $120bn they spend each month buying up assets would imply that the bank is confident that they’ll achieve their goal of controlling inflation and increasing employment. The main reason that the decision hasn’t already been reached is likely to be that the spread of the Delta variant has introduced an element of uncertainty that has clouded the earlier view that the pandemic was under control.

Markets are still doing their best to focus on the positives and one thing that has prevented the fallout from potential rate rises being worse are the results from the latest US earnings season. With around 90% companies having announced their latest data, almost 9 out of ten of them indicated that their revenue and also earnings were ahead of forecasts, the highest percentage in a decade for both measures. Taking an alternative view, the other thing that is on the rise is corporate borrowing. Sales of low-grade debt have hit $650bn in the year to date as investors were willing to accept more risk to achieve higher levels of income as interest rates looked set to remain low. These low rates are the safety net for levels of risky debt that have exceeded any previous annual record with a third of the year left to go, but it leaves them open to higher default rates when central banks decide that the time is right for a change of policy.

One factor that will determine how soon the Fed takes action is inflation. The July reading came in at 5.4%, the same rate as the record-high from June and the first time in 5 months that the rate didn’t increase. Some commentators have suggested this means that peak inflation has been reached while others have said it’s far too soon to make a call on whether this is the case. Either way, even without experiencing a further rise, the rate is still very high based on the long-term historical average, but it potentially does give some credence to the Fed’s stance that current levels will be transitory.

A big driver of the future inflation rate is what happens to the price of oil. This came back to the fore recently with the US calling on OPEC to boost production levels to help keep the global economic recovery on track. This runs counter to previous White House requests from Donald Trump who wanted output to fall to help lift prices in order to return US shale oil producers to profit. The challenge for OPEC and other producers is that the prevalence of the Delta variant is lowering demand and they will be wary of lifting production at the same time, therefore magnifying the scale of price cuts.

Fuel prices in the US are around 50% higher than they were a year ago and Joe Biden is seeking to use every lever he can to maintain the rally. On this front he will have been cheered by the news that his $3.5tn infrastructure bill was passed by the Senate, thanks to support from 19 Republican senators in an unusual act of bipartisanship. The package, which includes spending on things like education and climate change, still needed to be approved by the Democrat controlled House of Representatives. Whilst this should have meant that the passage of the bill was straightforward, some of the president's own party wanted a commitment for further spending in exchange for their backing. Negotiations finally completed as the month came to an end, but only after a number of veto rights were put in place.

In China, rising infection rates have coincided with a clampdown on technology stocks which is undermining the country’s previous strong recovery from the virus. The approval of a new data privacy law has seen further falls in Chinese tech companies, sending the Hang Seng index back into bear territory. Whilst most of our funds have small holdings in the affected sectors (for example Fidelity Emerging Markets had sold down much of their holdings in Tencent et al prior to recent events), the contagion effect has spread to related instruments as well. The impact of this was clear in July where the top 43 worst performing funds were all Chinese or China-heavy emerging markets vehicles. This had a knock-on effect in developed markets with global stocks recently having one of their worst weeks since June.

This makes the case for having a diversified portfolio all the more clear. We have to ensure that we benefit from markets with strong returns while limiting this exposure to avoid taking on excessive risk. This is one of the reasons that we review our portfolios on a quarterly basis because in doing so we are able to rebalance holdings back to the correct levels. Without doing this, the weighting to the best performing regions and asset classes will keep on rising, which is great while performance is good, but less so if something happens to interrupt the party.

Market and sector summary to the end of August 2021

One of the themes from the quarterly review centred on the sustainability of the market rally we’ve enjoyed since the second quarter of 2020. The recovery from the pandemic low point has been unusual both in how quickly it occurred and also in its scale. In some markets, such as the American S&P 500, it took just 6 months for share prices to bounce back while many of the main indices in the EU reached their previous highs after a year. In the UK, the FTSE 100 is not quite back to its former level, but as we’ve discussed before, there are other factors at play that have held back our recovery.