To all clients and partners,

I am writing to tell you of the steps that we have taken across the Harwood Wealth Management Group in relation to the Covid-19 pandemic.

We continue to ensure that the safety of our clients and employees remains our priority and since the start of the outbreak we have been assessing potential disruption and planning accordingly in line with our established Business Continuity Plans.

At this time the majority of our staff continue to work from home and whilst we are cautiously returning to more ‘normal’ working conditions this is only where it is necessary to do so and in accordance with government guidelines.

Since March last year we have been evolving our practices including our IT infrastructure and as a result have found ways to work more efficiently and effectively.  We are of course looking forward to meeting in person once again and enjoying collaboration with both clients and staff.  We hope to continue to do this in the ways that suit the needs of our clients as well as maintaining our uninterrupted provision of financial services.

We hope that you and your family stay safe and well.

This is the April 2021 update from the IMS Investment Team. The purpose of this bulletin is to provide a summary of the recent headlines and trends that have been influencing markets over the last month and to highlight key aspects of the IMS portfolio service. 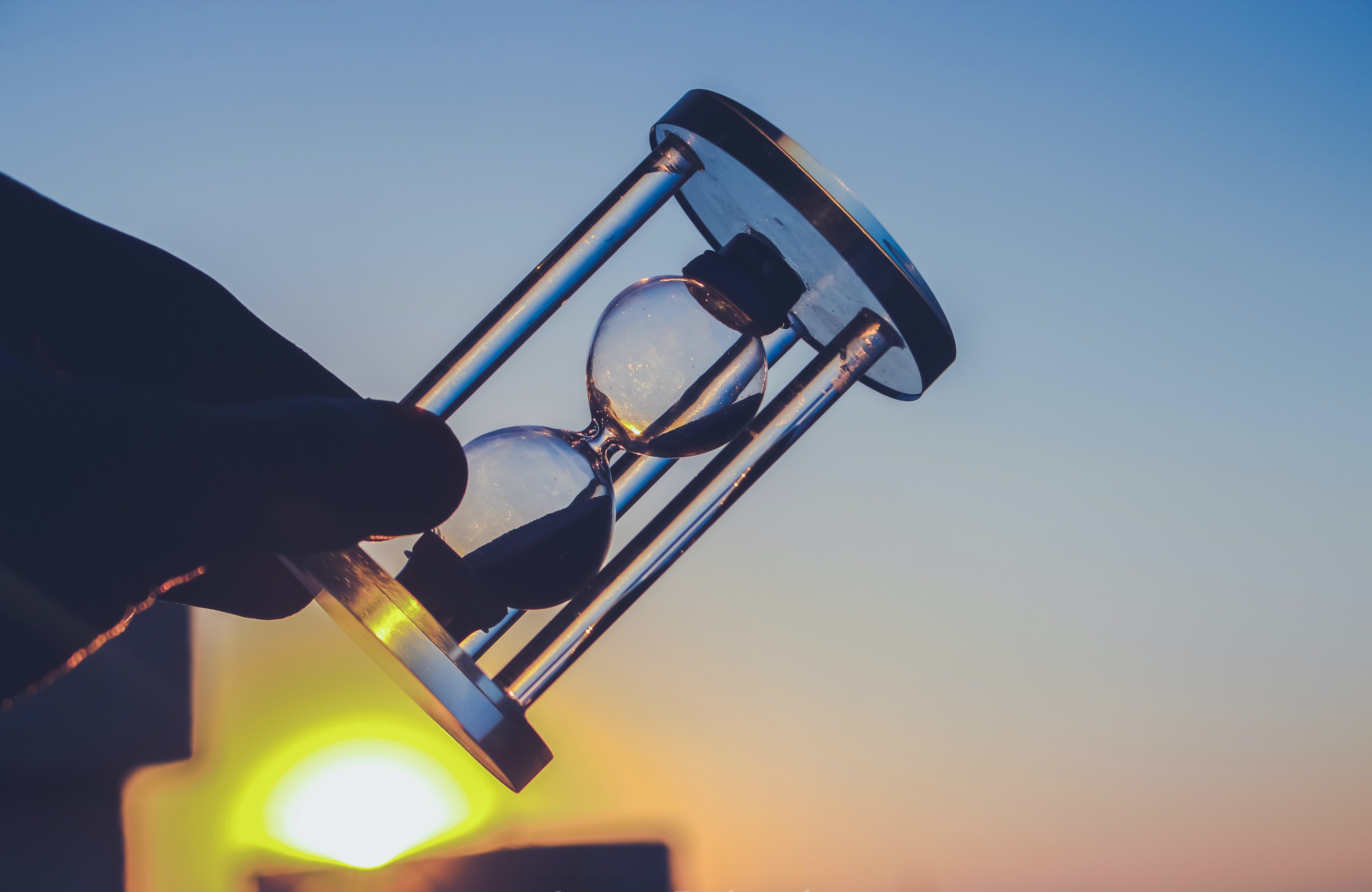 As the introduction says, this update is ostensibly for the discussion of the economic factors that impact on markets, but it is also relevant to consider the sorts of things that impact on the people that invest in and through those same markets. Cognitive bias is a strong influence on investment decisions, whether it is the urge to invest more when markets are rising, or simply the impact that good or bad moods can have on our confidence and behaviour.

March is typically a wet and pretty miserable month, and that felt especially the case as we began yet more weeks of lockdown, with our freedoms to travel and to socialise limited. However, towards its end we entered British summer time, with the clocks springing forward to give us an additional hour of evening light, many areas enjoyed record high temperatures, and, as we headed into the 4-day Easter bank holiday weekend, we passed the first stop on Boris Johnson’s roadmap for unwinding lockdown restrictions.

The relaxation which applied in England allowed up to 6 people to meet outside and judging by the scenes in parks around the country people were quick to take advantage. Although he indicated that it is hard to know how strong our defences will be as our lockdown eases along with the rise in infections on the continent, the prime minister insists that he is confident that his plans remain on track thanks to the strength of our vaccination programme.

I’m sure that as individuals most of us would have entered April with a greater sense of optimism from the month before and this feeling will have been shared by investors and market movers, no matter how they might claim to be entirely rational beings. Whether as a direct consequence or not, this was visible in the UK’s main index, the FTSE 100, which was up over 4% in March. This put it broadly in line with other major indices which is something it has struggled to do for most of the previous year. 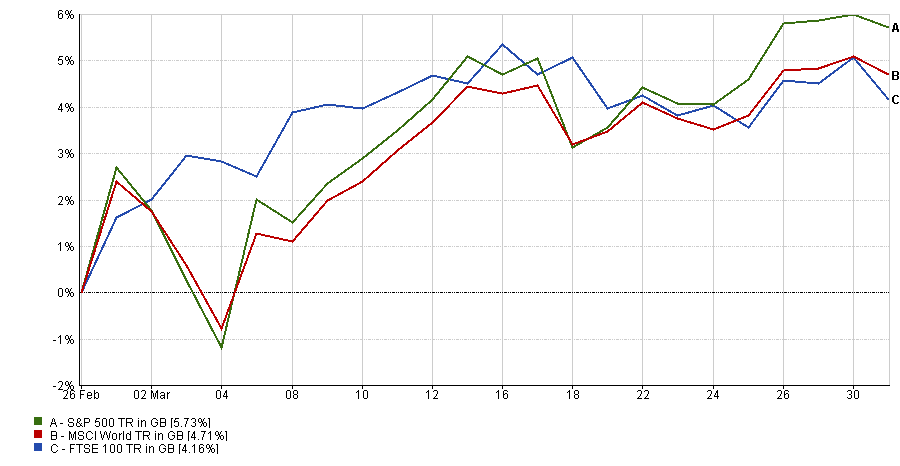 Of course, events, reports and forecasts are the primary driver of market returns and one of the most notable over the period was the fluctuation in the 10-year Treasury (T-bill) yield. This is unlikely to be something that would make it past the pages of the financial press and although we did touch on the subject in our previous update, the impacts became much more clear throughout March.

The rate has continued to rally strongly since the low point towards the end of 2020 and it recently passed the highest point since last year. The 10-year T-bills index is a proxy for global debt and an important gauge of the direction of travel for bond prices. The implication of this ongoing rise is that the Federal Reserve (Fed) will have to step in and increase interest rates in order to keep them under control, something which few people (not least the Fed themselves) are keen to see happen.

The key factor behind the rise is the speculation about inflation as the world economy recovers from the pandemic. This (somewhat counterintuitive) fear was boosted by an improved outlook for the US economy that was responsible for further volatility in markets towards the end of the month. Following their latest rate-setting meeting, the Fed released an improved forecast for the American economy, raising it to 6.5% from the 4.2% they announced at their last meeting in December. The update helped to send the main 10-year Treasury yield above 1.77% at one stage, with the rate finishing about 1.72% for the first time since January 2020.

That level is broadly held to be crucial because it can cause large institutional funds to switch from equities to bonds where they can derive a sufficient level of income without the risk inherent in shares. The news was enough to send US markets sharply down, especially in the tech-focused Nasdaq index, which fell into correction territory. An interesting bit of context is the reversal of fortunes in one area that has done particularly well until recently: the total loss in electric vehicle companies (of which Tesla is over half of the total market cap) recently stood at an extraordinary $730bn over a 30-day period. The other impact was on bond prices (which move in the opposite direction to yields) and there were large movements in debt securities around the world.

Another source of inflation is likely to be the 90 million payments that have been sent out as part of Joe Biden’s Covid stimulus package. The relief package eventually passed through the Senate despite not receiving a single vote from the Republican party and from there it moved through the House of Representatives before being approved by the president himself shortly before the previous stimulus measures ended on the 14th March. The resulting payments, which ran to $242bn (out of the $1.9tn total pot), were sent directly to American bank accounts and another $442m worth of cheques were also posted out. Whilst a lot will rely on how US consumers feel about the economy, if they use the payments to go out and treat themselves that could feed through into price rises.

Volatility in bond markets was eventually reduced in large part thanks to a statement from the Fed which attempted to reassure investors about the medium-term outlook. They reiterated that a majority of policymakers see no probability of rate rises before 2024 and insisted that following the move to an average inflation model, they want to see actual evidence of long-term trends rather than just forecasts. In the UK, the rate of inflation as measured by CPI fell to 0.4% in February from the 0.7% rate in January. Despite this, forecasters still expect the rate to rise strongly in both countries later this year.

Elsewhere there were ructions in technology stocks in both the US and China. The former had already been struggling because of the moves in the long-term Treasury rate, but towards the end of the month, investors’ thoughts turned to where they could find value on the assumption that the economy would emerge strongly from the pandemic, with shares in financial and industrial companies rising in response. The latter was caused by concern that American transparency requirements could see some of the largest Chinese tech stocks delisted from US indices. The Securities and Exchange Commission has stepped up plans to require foreign firms to allow access to their audits, something China has long resisted. In addition, plans by the country to oversee all data collected by tech companies as part of a crackdown on the influence they have begun to hold saw shares in some firms fall by up to 10%.

The month ended on a very mixed picture. Whilst the situation is improving in the UK, France has returned to another national lockdown as they continue to suffer from low vaccination rates along with scepticism about their safety. The Organisation for Economic Co-operation and Development (OECD) took a positive view and recently updated their economic forecasts with the global growth rate increasing by 1.4% from the December rating to hit 5.6%. They believe that output is likely to overtake pre-pandemic levels by the middle of the year, but while the US and China are set to power the recovery, smaller and less developed nations are likely to continue to face very tough conditions for many years yet. Managing around these bubbles whilst avoiding sectors which sit at elevated valuation levels will no doubt continue to keep us busy for at least the remainder of the year.

Market and sector summary to the end of March 2021

March is typically a wet and pretty miserable month, and that felt especially the case as we began yet more weeks of lockdown, with our freedoms to travel and to socialise limited.